The Slicer Controller is the main script for controlling the slicing of Game Objects.

It co-ordinates any Slicer Components that are on the same Game Object to it.

It also co-ordinates any Slice Modifiers that are a descendent of the Slicer Controller.

A descendent Slicer Ignore component or Slicer Controller will stop further processing of that branch of Game Object descendants.

It will also manage any Slice Modifiers it finds while scanning the Slicer Controllers descendants.

When scanning through the hierarchy if it encounters a Slicer Ignore it will process any Slice Modifiers on that Game Object and will stop processing any further down that branch of descendants.

Similarly if it encounters another Slicer Controller it will stop processing any further down that branch of descendants.

A Slicer Controller has a few keyboard shortcuts to quickly performs tasks. These hotkeys are only available in the Unity Editor.

Scaling a model will always stretch its details, generally this is not a desired outcome.

In the example below the slicer is set to slice the very center of the rug. This results in all of the vertices of the rug being moved outwards to fit the size of the slicer.

This button enables and disables Edit Mode. In Edit Mode you can safely change the properties of components that is normally edited when slicing. It also enables Gizmos in the scene view to help with visualizing how the object will be sliced.

It is recommended that you have the parent Slicer Controller in Edit Mode when you are making changes to how an object is being sliced.

In most cases it is ok to make changes outside of edit mode, but if you are having issues with slices staying set, try making the adjustments in edit mode instead.

The Size property determines the final dimensions of the sliced Game Object. It will scale up the original bounds of the Game Object using this property.

In edit mode the size property is represented by the yellow outline.

The Slices property determines where the slices happen for each dimension. Ranging from 0 (the center of the object), to 1 being the furthest extents of the object.

In edit mode the slices property is represented by the red outlines. 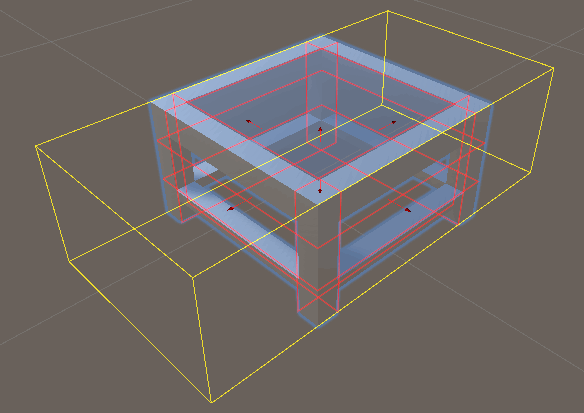 Inspector of a Slicer Controller

A Sliced table in Edit Mode